Over the past year, we have produced a number of new publications. Alexander Betts published The Wealth of Refugees: How Displaced People Can Build Economies (Oxford University Press), which explores the broad question of what sustainable refugee policies can look like for the twenty-first century. It argues that although we live in an age of displacement characterised by rising displacement numbers and declining political commitment to asylum, optimism should come from recognising and building upon the contributions of refugees themselves.

The Programme has also continued to have policy impact. An impact evaluation of the IKEA Foundation’s $100m investment in the Dollo Ado camps was published as not only a final report but also two policy briefs and a documentary film, directed by Raphael Bradenbrink. The evaluation has played an influential role in shaping UNHCR and the IKEA Foundation’s programming in the five Dollo Ado camps in Ethiopia, and led to wider reflection on the role of the private sector in promoting refugee livelihoods around the world. We also published a policy report, based on an evaluation commissioned by the World Food Programme, entitled Cash Transfer Models and Debt in the Kalobeyei Settlement, which has been influential in shaping policy recognition on the strengths and weaknesses of cash assistance programmes for refugees.

We have been working on a series of new publications based on the Dataset, as well as complementary qualitative research and a series of impact evaluations. This includes a paper on ‘Social Cohesion and the Role of Refugee-Host Community Interaction’, commissioned by the World Bank, UNHCR, and the FCDO. The paper explores the relevance of the ‘contact hypothesis’ (that greater inter-group interaction leads to more positive host community perceptions of refugees) in relation to refugees in East Africa. We have also worked on ‘Refugee Mobility: Evidence from East Africa’, in which we have used the Dataset to examine the under-researched question of refugee mobility patterns in the Global South, both describing and explaining patterns of refugee mobility. Finally, our third paper, ‘The Economic Lives of Refugees’, describes and explains variation in the economic lives of refugees across contexts and populations.

Over the summer, we welcomed five research interns from the UNIQ+ graduate access summer school to the team. During the six-week internship, we worked on a shared project relating to gender and the economic lives of refugees. The working paper was based on quantitative and qualitative data from the Refugee Economies Programme Dataset, and explored female refugee entrepreneurship and the gendered income gap between refugees in East Africa. We hope to publish this as an RSC working paper soon.

Further details about our work and impact this year are available in the recently published RSC Annual Report and our latest publication, Refugee Economies Programme, Activities and Impact 2016-2021.

In October 2021, we launched a series of new research projects, including cross-border economic strategies (led by Naohiko Omata); shocks, vulnerability, and coping strategies (led by Olivier Sterck); the political economy of socio-economic rights (led by Alexander Betts); and the gendered economic lives of refugees (led by Maria Flinder Stierna). We will continue to update this site as our research progresses.

If you have any questions about our research, please do get in touch. 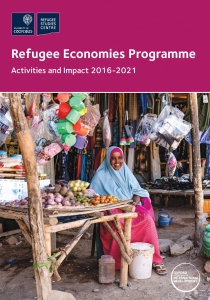 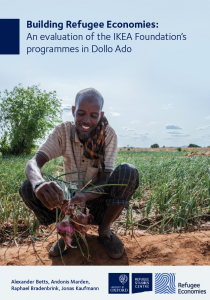 Cash Transfer Models and Debt in the Kalobeyei Settlement