The report that emerges from the work is entitled Talent Displaced: the Economic Lives of Syrian Refugees in Europe. The survey presents a paradox: a significant number of refugees surveyed are highly educated and skilled; 38% have university education, and one-third were employed in either skilled work or the professional services industry in Syria. However, the majority of the respondents (82%) were unemployed.

On the refugee side, three main factors stand out as explaining this paradox:

Many of the businesses interviewed were open to the idea of hiring refugees, but seek legal and regulatory guidance around employing them. Additionally, many had misconceptions relating to their potential as prospective employees. 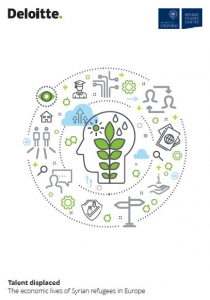 Talent displaced: The economic lives of Syrian refugees in Europe